Showing posts from June, 2019
Show all

5:39 AM
Why I feel Air India (AI) should be saved and MTNL & BSNL should not. Think of AI as the entitled only daughter that was provided with extraordinary privileges while her family was slowly drowning in debt. Once she realized that, she became frugal. Contrarily, MTNL and BSNL are those brat brothers who, despite realizing their family's travesty, never gave a damn. AI Express has still managed to post operating profits for the last two years. Their fleet is struggling, but maintained. They struggle with on time performance, but they are flying. They are still in the game, and not because they have a rich dad. MTNL and BSNL have utterly failed in understanding the competitiveness of the business they operate in. I doubt they even understood their finances well, given that their own auditors say that their net worth has fully eroded. And, luckily they don't have to worry about customer service anymore because, well, very few customers (I being one of them). Every organ
Post a Comment
Read more 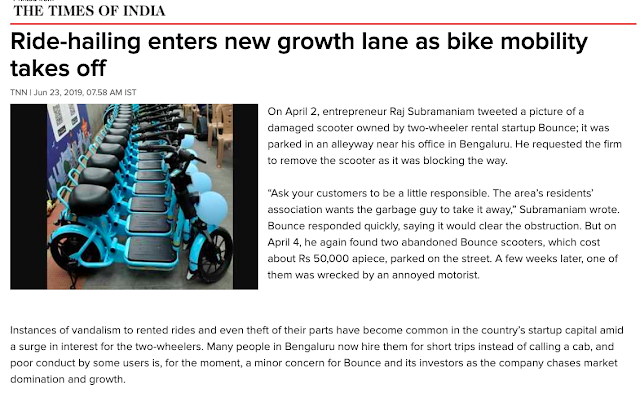 Early disruptors face a huge challenge in finding their footing in a chaotic, unorganized and unregulated market. Before Zoomcar, the concept of self-driven car rentals was alien to India. One of the reasons Zoomcar caught early traction was because it got people excited about not having the hassle of driving their own vehicles for long distance trips, while having the "fun" of driving, regardless. What sold self-driving rentals early was not convenience. It was carefreeness. Consequently, many of their early vehicles were being driven rashly with drivers cutting corners with traffic laws [anecdotal observations]. Their first few batches of vehicles must have worn out quickly. When you self-drive a rental today, you have to comply with their terms. That includes indemnifying the company, taking potential insurance liability on yourself (which discourages you from sharing the steering with your buddy sitting next to you), and being accountable for breaking any traffic
Post a Comment
Location: Hyderabad, Telangana, India
Read more

5:54 AM
My father had an interesting view of most things, but it always intrigued me. I try to reminisce some of our conversations on father's day every year. When I was in class 5, I left a question unanswered in a school test. "Why is the sky blue?" or something like that. Papa asked me why I didn't answer it, and I said I didn't know the answer. Now, in his fascinating way, he told me "but half the answer was already in the question!" I said "where?" He said "'The sky is blue because...' see, that's half your answer. Now, all you have to do is study half of what the other idiots are studying because you already know half the answer to every question." I was blown away. This man is a genius, I thought. Years later, I learned about positive reinforcement through Dale Carnegie training and realized how much that helped me in conquering my fears and being more confident in life. Anyway, I still failed in the next test. I
Post a Comment
Read more

5:43 AM
Founders of early stage startups are often anxious about how much their company should be valued at. If your product is pre-MVP and pre-revenue, you can't quantify your cash flows. Consequently, you can't Discount your Cash Flows to a "Oh, that's a cool number!" I ask you four questions before you come to a number - How difficult is barrier to entry for you? Are you competing with Uber in mobility or Swiggy in last mile delivery? Stay low. How big is your competitive advantage? Can you continue to grow at 20% YOY for 15 years? That's 10 years to IPO and another 5 for economies of scale to kick in. Do you have patents? Do you have an intrinsic advantage over your competitors to keep your costs low? If yes, go high! Will it be too easy for your customers to switch to your competitors (Uber vs Ola; stay low), or too tough (Whatsapp; go high)? How matured is the market? Are you positioned for a stable share in a growing market (say gig economy, go high).
Post a Comment
Read more

The Trichotomy of Entrepreneurship: Part 3 - Discernment 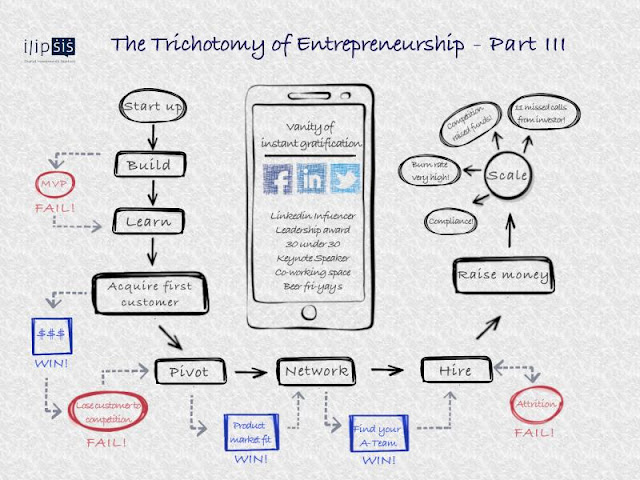 Discernment: What you go through when you take the plunge. This is where you realise that while perception is seeing results and observation is seeing the wins leading to them, discernment is wading your way through a mess of failures. For the proverbial fitness model, this is when you start working out to realise that your body is sore all the time. That you need to make massive sacrifices in your diet and lifestyle. And when you’ve got everything right, you still fail because the circumstances aren’t favourable. This is often where many founders start contemplating their choices. “That paycheck wasn’t encouraging, but at least it was regular. And perhaps I didn’t appreciate the transcontinental business class upgrades enough.” Few are able to wade through the discernment phase of entrepreneurship. There’s no set timeline. There’s no set amount of failures. The ones who do get through, get through quietly, exhausted and very, very lonely. Then, they indulge themselves in the
Post a Comment
Read more

The Trichotomy of Entrepreneurship: Part 2 - Observation 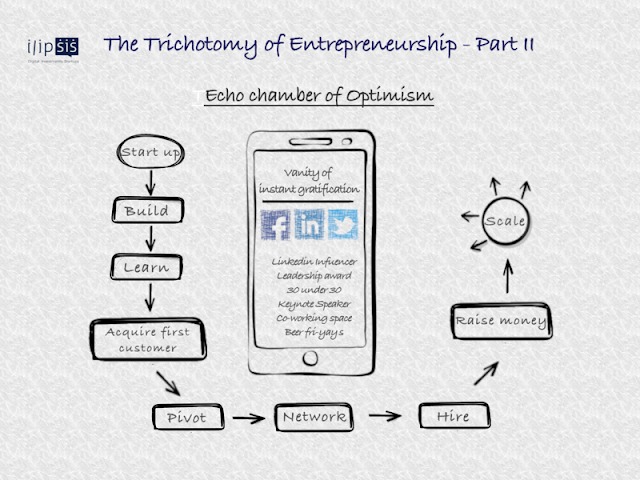 Observation: What you read, listen and talk to others about entrepreneurship. This is an echo chamber of optimism. This is where you understand that the fitness model probably hits the gym a few times a week. He probably also benches, squats and dead-lifts. You understand that there’s a process you’ll have to follow to get where you want to. Take the first left, then third right, turn at the roundabout and you’ll arrive at your destination. All you have to do is make a minimum viable product, hire a few folks, go about raising funds from investors (Ooh, that sounds exciting!). Every write up, podcast and book you read or listen to fills you up with so much optimism. “Sure, I can do that.”
Post a Comment
Read more

The Trichotomy of Entrepreneurship: Part 1 - Perception 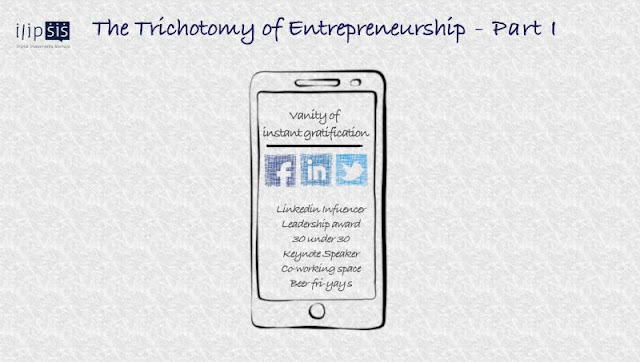 Perception: What you see, especially digitally, is a vanity of instant gratification. As an entrepreneur, that's where you want to be. It’s like seeing a ripped fitness model with a chiseled chest, abs and deltoids; and thinking "I'll be that guy one day". You’re seeing the end, without much thought behind the means.
Post a Comment
Read more

"What's your sole purpose in this job?"

In the movie Forrest Gump, a drill sergeant pulls Forrest and asks him “What’s your sole purpose in this Army?” And without skipping a beat, Gump yells “To do whatever you tell me, Drill Sergeant!” Over the years, I’ve had quite a few young professionals ask me how they can grow in their careers. I tell them, “Well, anything you do at work should make your boss shine in front of their bosses”. OUCH! The contempt I see in their eyes when I say these words is remarkable. It’s like seeing Thanos about to snap his fingers right in front of my eyes. But I see it as confirmation bias. People interpret “making your boss shine” as being a part of the entire sycophancy cult - and nobody wants to proudly be in that club! What if - and hear me out - *your work* actually gets them goodwill in front of their bosses? You'll become their go-to person for whenever something critical comes up. They'll ask you to prop-up that presentation because the last time you did that, the Chairm
Post a Comment
Read more
More posts